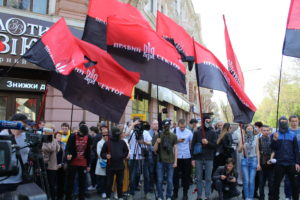 Odessa, 1 year later. Last year I was in Odessa, just like this year, for the anniversary of May 2, 2014: The massacre of the “union house”. This year I was invited by: Global Rights of Peaceful People (GRPP). 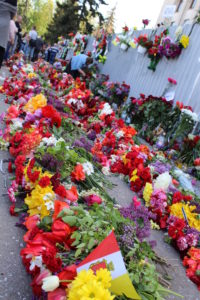 On May 2, 2014, a horrible event took place in Odessa. At the (Maidan) square, in the union house, at least 48 civilians were burned alive when they tried to stop the fascists (Right Sector Pravy Sector (2), led by the current government of Porochenko, they attempted a revolution (nationalist ) And occupied the building, then poured gasoline into it and lit it, knowing that there were still people in the building who were burned alive (at least 48)! To this day on, the perpetrators were not arrested and tried.

Odessa is an example of the situation in the Ukraine. According to the EU and the Netherlands, a country that has to become a member of the EU and to get rid of Russian influences, Russia would have started the war there, according to them. However, Ukraine is ruled by a fascist government consisting of; Svoboda (1) and Pravdy Sector (2). Both fascist parties, part of the current government, have declared a fascist-nationalist state and want to eliminate or deport the ethnic Russian-speaking population. This is what the EU is supporting, the so-called “revolution” 3 years ago, on the Maidan Square in Kiev, was supported and founded by  elements such as Victoria Nuland, Hans van Baarle (VVD Euro parliamentary), Guy Verhofstad (former prime-minister of Belgium) and supported by George Soros’s money and organizations.

On the morning of May 2nd, 2017, the fascists of Pravdy Sektor (2) and Svoboda (1) were already active and held a memorial meeting at various streetcorners and squares in Odessa. Their message was simple and aggressive: Dead to  Moscow, death to the Russians, and all sorts of witty remarks to Russians and people who passed by . New to me was the support of religious leaders of various churches.

That morning there was a priest present at the Pravdy Sector (2) commemoration. This spoke to the fascists with an unknown, hate-bearing and NAZI-sounding rhetoric. Many members of the Pravdy Sector were blessed for their (deeds) deeds against the Russian speaking population by the present priest!

I’ve been able to interview a supporter of the Pravdy Sektor (2) who spoke English and his version of the story: The events on May 2, were done by Russia, Russians dressed as Pravdy Sector (2) fans have stormed the union house and burned it, to blame these fascist nationalists. 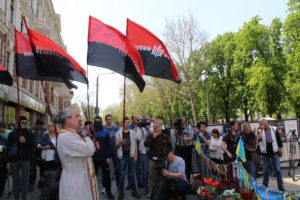 Pravdy Sector (2), with priest, this priest returns to the story later, he pronounced a priest’s language not worthy). Photo Claudius Lucassen

After this meeting, I went to the square (Maidan) where the horrible events of May 2nd, 2014 took place. The square was crowed with a huge police force, consisting of regular police, special units, Azov Regiment (3) and snipers who   encircled the square, from the roofs of the surrounding buildings. 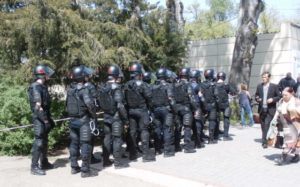 This year, unlike last year, the commemoration took place precisely in front of the union house, detection gates were set, to control the crowd of mourning mothers and relatives passing by with their  flowers. The press was also allowed. Although, there were hardly no press available, Russian channels were not welcome this year and many (Western and Russian) press were already denied access to Kiev airport.

The emotions ran high, many people could not hide their emotions, laiy down flowers and the emotions were at its heigh when the “mothers” came out of the bus with T-shirts of  their murdered sons and daughters. There were several provocators running between the crowd, secret police and Azov fans, wearing black clothes with an EU sign on their shirt. 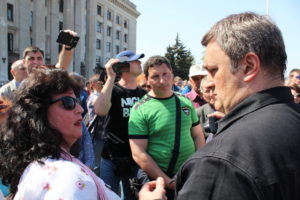 Conversation with a provocateur, a secret service employee, on his shirt the EU emblem, chased by the furious crowd of the square, later in the story, he pops up again again! Photo: Claudius Lucassen.

The emotions were high, hereunder, the story of a man born (1948) on CRIMEA, Russian until 1954. Until Nikita Chuschchev (4)  decided to give it to Ukraine as a gift for deserved heroism in WWII, when he became leader of the former Soviet Union and because, he was a Ukrainian-born himself.

This man (known to the editor), his parents moved to Odessa because, his family was giving work  there, considered himself as Russian and could not imagine that Odessa would be in a state like this and he could not return to the Crimea because he suddenly became a Ukrainian citizen and no more Soviet citizen. 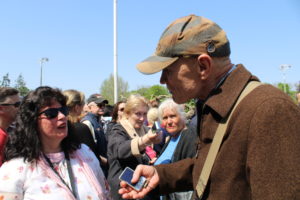 The Ukrainian man from CRIMEA, an Ukrainian citizen, but feels like a Soviet / Russian citizen. Photo: Claudius Lucassen

On the square besides the hundreds of mourners, many dissidents were present, such as a writer who lives in Germany (wishes to stay anonymous) and the well-known Ukrainian journalist: Ruslan Kotsaba:

Ruslan Kotsaba (5) is an Ukrainian journalist born in Ivano-Frankivsk (Western Ukraine), who worked for the public TV channel ‘112’. He was the first journalist to go to the Donbass region to see what was going on with his own eyes. His conclusion was that it was a civil war, a brother war. In January 2015, the government announced a new mobilization wave and Ruslan Kotsaba no longer stayed silence: he wanted  the Ukrainians to know that the war in the East is not a defense war or a “Russian invasion” as it is officially called, but a civil war. So he cried out: Stop this war, stop fascism and talk, for these statements he has been imprisoned for 564 days because, it didn’t comply to the  fascist Ukrainian government. 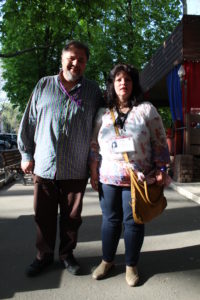 The journalist: RUSLAN KOTSABA, I have conducted an interview with him, which I will upload later with translation.

CEREMONY FOR THE KILLING OF UKRAINIAN PEOPLE

At the end of the afternoon, I moved  from the square to a part of the inner city where the Pravdy Sector (2),  and Svoboda (1), along with many priests, from various religious churches, spreaded nationalistic fanatism and puts you back in the time of NAZI Germany, held a ceremony.

A memorial meeting was held for the fascists who killed their brothers and sisters in the Donbass on a voluntary basis, accusing them of being followers of Russia and above all, accusing them of conducting war in the name of Russia. While, as Ruslan Kotsaba says, they are the one terrifying the Ukrainian people (this fascist governemt), this volunteers are sponsored by a nationalist and fascist government and also sponsored by the EU and the Netherlands, who pursue NAZI-like practices  and using EU money for weapons, religion and murder. The secret service was also present, the same man with the EU logo, was also present at the Union Maidan square ceremony. This ceremony  was introduced with “Folk Music and Heavy Metal, a rare combination, for a church!

There were representatives of all churches (except the Russian Orthodox) priests who unanimously approved the actions of these people and encouraged them to kill many “Russian minority” people in the Donbass. 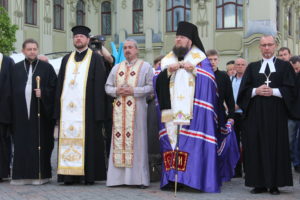 The “ceremony” for the volunteers, here we see the Pravdy Sector priest, who later changed his robe and wore the 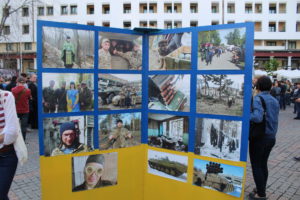 “Swatsika” emblem on his ordinary clothes.

I interviewed a priest:  FatherAlexander and asked him why the church leaders were here and not at the square (Union House), were there were at least 48 victims to commemorate!

Father Alexander had the following answer:

According to him, they had done so last  year. What is absolutely not true, I was at Union house square attendance in 2016, but according to him, the participants at the square did not want them (church leaders), so they didn’t attend this year!

He  said, he himself was “embedded” for 30 days with the Ukrainian volunteers and every priest who had attended the ceremony on the square had done so. 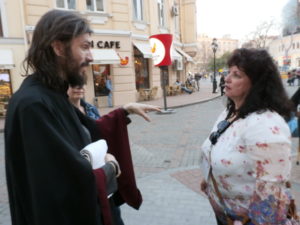 Ukraine in 2017 has not changed much, perhaps even became worse, fueled by religious nationalist fascism of the current government of Poroschenko. The EU, including the Netherlands, who undemocratically ignored the NO vote of the Dutch people (against the association treaty with Ukraine) and in particular, Prime Minister Rutte (VVD), who with a a few changes to make the Duch people “shut their mouth”, ratified the treaty. The EU and the Netherlands are supporting a nationalist fascist government. That will be part of the EU.

Photo Impression of the day: 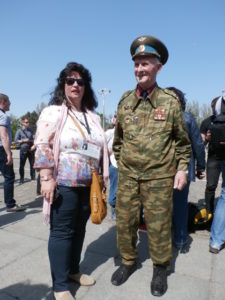 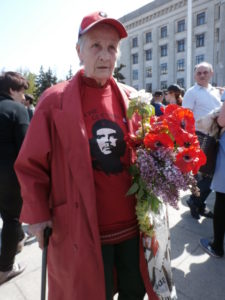 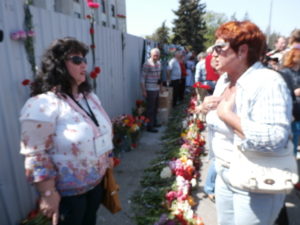 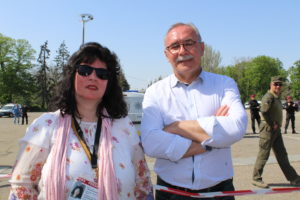 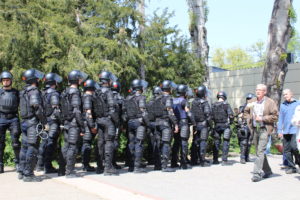 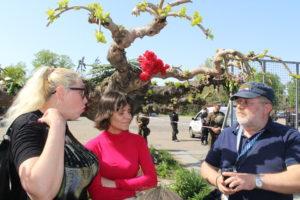 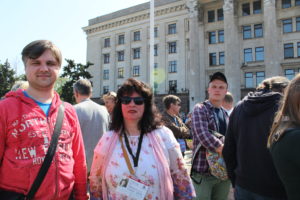